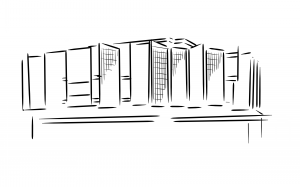 A department store popularly called “Sarajka” (Sarajevo girl) or “Plavuša” (Blond girl) as the citizens of Sarajevo called it because its facade was lined with blue panels, was built, equipped and put into operation on April 5, 1975, as a gift from the Unima company for the 30th anniversary of the liberation of the city of Sarajevo. The building was erected according to the project of architect Vladimir Zarahovic. The building had five floors and housed a retail space with 16 departments, a supermarket, snack bar, restaurant, dressing room, administration offices, dispatch and mechanical center, loan department, warehouse, shelter and manipulation space. During the siege of Sarajevo – Sarajka was completely destroyed. In the process of privatization, the building was sold to Bosnia Bank International. The former Sarajka / Plavuša building was completely demolished in February 2006. The new building that replaced Sarajka, known today as the BBI Center, was opened on April 6, 2009.