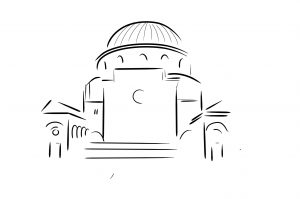 Back in 1900, the idea of ​​building a new Temple was born among the Jews of the city of Sarajevo. The 1923 Municipal Council initiated the idea of ​​building a temple from a blind spot. Immediately after the appeal, a statute of 7 November 1923 was adopted by the same Council. A Committee headed by the President of the Jewish Municipality, Mr. Abram Mayer Altarac, was constituted. The most prominent Sarajevo Jews responded to his invitation for cooperation, among them the overlords Mr. Moric Levi, Mr. Mordehaj Atijas, Mr. Avram Levi Sadic, Mr. Cesar Sutnbulovic, etc.

In February 1924, land was purchased on which will be located at the Great Sephardic Temple and in the amount of 100,000 Swiss francs, the foundation stone was laid in 1926, the building was completed in 1930. Appearance Temla is an idea by architect Rudolf Lubinsky and works were carried out by the construction company Till and Schmidt.

The size of the temple was 100 × 30 meters and could accommodate up to 1000 worshipers, while the dome that adorned the top of this building rested on 28 concrete columns, also decorated in Maori style. During 1941, the Nazi government persecuted the Jewish population, looting property and destroying a culture that had coexisted harmoniously with other cultures in Bosnia and Herzegovina for centuries. In 1965, architect Ivan Strauss was tasked with rebuilding the old temple and adapting it to the city’s current needs, because after the war, the Jewish community donated it to the city of Sarajevo.