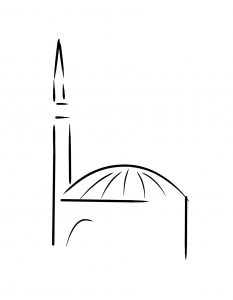 In Cemalusa, the place where Ferhadija separates from Titova ulica, up until 1940 there was the old mosque of Havadža Kemaludin with a burial ground.The mosque was first mentioned in historical sources in 1515 but is assumed to have been built earlier. With the arrival of Austria-Hungary, the neighborhood of Ćemaluša starts to build suddenly, so in a short period, instead of Bosnian houses, a massive building arose, and along Ferhadija rail tracks were installed that were occasionally traversed by the steam train „Ćiro“, bringing in material for the construction of the Cathedral.

Such great construction activity next to the mosque caused its gradual decay as well as the absence of more believers in the neighborhood, who regularly visited and renewed it. Shortly before the World War II, during the reign of the Kingdom of Yugoslavia, in the unfavorable moment of the division of BiH between the Croatian Banovina and the Serbian countries, the Vakuf Directorate destroyed the remains of the mosque and began the brave construction venture that will permanently mark the panorama of the city. It was decided to build a large building – the first skyscraper in Sarajevo, one in five in the region at the time.

Its design had to be symbolic and in some ways must have been a remembrance of the mosque that was demolished in its place. The skyscraper project was done by renowned architect Reuf Kadić, who together with his brother was the forerunner of modern architecture in BiH. Most of the 12-story building with a basement that served as the foundation, was built in the short term, but the works were only completed in 1947.

A 40 meter high concrete structure is filled with bricks and green facade, and its large window surfaces give the interior maximum brightness and a comfortable feeling.