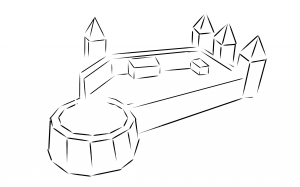 The fortification known as „White Bastion“ is one of the most impressive and important historical sites in Sarajevo. It is located on the southeast outskirts of the City, with an overview on the city valley. During the history it had a very significant and strategic position. The fortification is a part of the dominant defense walls that were surrounding the old city of “Vratnik”.

The value of the historical site presents the various strata, starting from medieval until the present time. During the archaeological excavations there were found the remains from medieval fortification from 14th century, Ottomans period (17th century) when the fortification was expanded and some new objects were built. During Austro-Hungarian rule the part of the fortification and the object inside the walls were demolished and destroyed and a new group of objects was built.  During the early excavation, a significant number of artifacts was found, registered and conserved for the purpose of the exhibition hosted in Museum of Sarajevo.