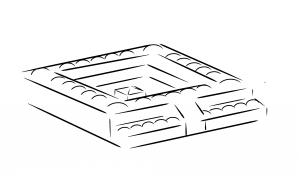 Situated in the old Ottoman centre of Sarajevo, Tašlihan is representative both of Ottoman architecture and way of life in the town on the Miljacka. Tašlihan was commissioned by the greatest benefactor of Sarajevo, Gazi Husrev-bey.

Tašlihan’s chief architect was Acem Alisi of the Persian Tabriz who had previously built the Bey’s Mosque. Along with Mimar Hayreddin, he was one of the leading creators of the early Classical Ottoman school of architecture.

The process of building of the Tašlihan and Bezistan is interesting in its own right. Tašlihan was made of stone (from foundations to ceiling), square-shaped, with a second floor, topped with lead-plated vaults. It was both a han and a bazaar (marketplace). Bezistan was constructed of the same materials and contained 52 shops. The domes and vaults were made by artisans especially commissioned from Dubrovnik. It is not well known that Tašlihan also served as a rallying point.

Tašlihan and the next-door Bezistan shared the same fate. They were damaged by fires and reconstructed. Tašlihan was damaged in the fires of 1697, 1788, 1831, and 1879. Following the 1697 fire, part of the Tašlihan passed into private ownership because the endowment could not finance its reconstruction until 1709. In the fire of 1831, the lead on the Tašlihan and Bezistan roofs melted. During reconstruction, Tašlihan was furnished with new stables and new guest rooms above them. Following the 1879 fire, it was not reconstructed, but the remaining portion became the garage of Vejsilaga Šaračević. In May 1912, the remaining portion was torn down to make way for a modern building the endowment had planned, but never completed due to the outbreak of war in 1914.

Once compact wholes, today Tašlihan and Bezistan stand as opposites. Bezistan still serves its age-old purpose of trade and is in relatively good condition. The adjacent Tašlihan shows traces of a former monument. The eastern wall by the Bezistan has been preserved, as well as wall fragments in the inner courtyard. Today, the western portion of the Tašlihan is covered by the garden of Hotel Europe.