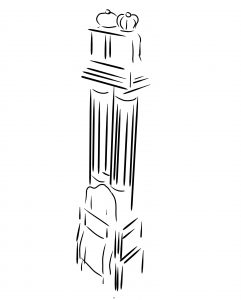 A memorial to Archduke Franz Ferdinand and his wife Sophie Chotek was erected in 1916, on the left-hand corner of the Latin Bridge. It was made of granite and whiter marble.

The plaque commemorating their death and a medallion with busts depicting the Archduke and the Duchess were the base for two Greek-style columns with their family crests instead of the capital.

Two crowns were placed at the top of the columns. It was removed by the authorities of the Kingdom of Serbs, Croats and Slovenes in 1919. Foundations of the memorial were visible until the 2004 reconstruction of the bridge, as well as the stone benches on the right-hand side of the bridge, which remain visible even today.